When a command is not available, new implementation to run a program raises an unexpected error which is not being handled by the callers. An emulation of the old behaviour has been added to fix this regression.

If iptables is available but not iptables-restore, then the transaction model was not able to apply firewall rules. With this change, individual calls will be used for missing restore commands. This applies to iptables, ip6tables and also ebtables.

Only ask for authentication once for add and remove options

The service has been included finally in the release. It does not need to be added in RHEL now.

The zone specific ICMP rules for ICMP block inversion have been missing in zones with bindings, that are defined in the zone configuration file.

With using Python3 for firewalld, firewall rules have not been applied in some cases without an error message.

Splits up source and destination address lists for transaction

The firewallctl command line tool and also the man page of firewallctl have been completed.

There are also other bug fixes.

The new firewalld version 0.4.3 is available with mostly bug fixes and some usability enhancements.

The graphical configuration tool firewall-config now also has the ability to add and remove ipset entries loaded from a file. This is the same as the the command line options –add-entries-from-file and –remove-entries-from-file. This is possible in the runtime and also to the permanent environment.

Create backup on removal of zones, services, ipsets and icmptypes

The configuration of a zone, service, ipset or icmptype is now preserved in a backup file on removal. The backup file has an additional “.old” extension. This makes it possible to manually undo removals.

With version 0.4.2 the zone handling with NetworkManager and ifcfg files has ben changed to be more expected. Information about this hndling has been added to the firewalld and zone man pages.

All command line utilities now support sequence options. It is now for example simply possible to add, remove and query several services in a zone.

The new command line utility is an addition to the existing firewall-cmd and firewall-offline-cmd tools. It provides an other interface with shorter names.

There are other bug fixes and also code clean ups.

Changes are done in one big transaction instead of smaller ones. This speeds up firewalld start and restart tremendously. The start is done up to in six or nine calls to the restore commands depending on the configuration. This depends on ipset and also direct configuration usage. Also all other actions benefit from this change.

Enhanced handling of connections and interfaces

firewall-config has a new side bar with the active bindings of connections, interfaces and also sources. With this side bar it is possible to change the binding assignments in a simple way. A new overlay message window if the connection to firewalld could not be established or if it is lost. Speed ups for view changes runtime to permanent and back by introduction of new D-Bus methods in firewalld. The resize behavior has been fixed to be more expected.

The ICMP block is now completely handled per zone. With the new ICMP block inversion flag in the zone it is possible to invert the ICMP block. That means that the enabeld ICMP blocks are allowed and all others are blocked. In a drop zone these remaining types are dropped and not blocked. The logging of denied rules have been added to icmp-blocks.

Additionally to ports is it also now possible to allow source ports in a zones and also in a service in a similar way as existing ports. There is a new flag source-port for this. Source ports can also be used in rich rules as elements. The source ports can be combined with logging, limiting and also an action.

Rich rules with destination only

There are also several other bug fixes or enhancements and code optimizations.

Previously firewalld got a nice speed up by using the iptables restore commands, that made it possible to commit several changes at once. Now there is also a transaction model using these commands, which enables firewalld to apply lots of rules at once. For example to apply a single zone or also to apply the default rules and all zones while loading. 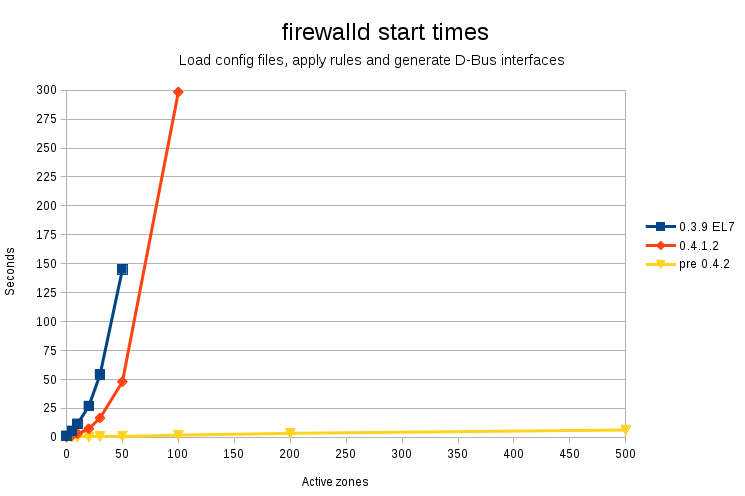 The diagram shows the time that is needed to start firewalld with loading of all config files, applying all rules and the generation of the D-Bus interfaces.

Each of the zones has 5 interface bindings which are therefore active and also applied.

Here is the table with all numbers:

The empty fields are not bench marked anymore, because it will take too much time. The first number in the cells is the number of rules. Since firewalld version 0.4.1.2, there are some extra rules because of a better way to handle zones with accept, reject or drop targets.

The number of rules is gathered with the command

The firewalld start method has been extended with time callsin the beginning and the end to get the time difference.